So I’ve been using the AdventureUltra Portable charger for a couple of weeks, and after putting it through the ringer it has officially been added to my gear pack. But how did it get there?

When I received this product my initial thoughts were “How am I going to use this?”. The AdventureUltra is highly rugged and has some heft, so I was concerned if I wanted to put this in my Timbuk2 backpack along with all the other peripherals I carry around on a daily basis. I decided I wasn’t going to test this as a part of my daily gear, instead, I decided to abandon my backpack for a couple of weeks and test this out as a replacement for a couple of different things.

Battery Capacity: 13400mAh
Recharges Via: Included charging adapter
Compatibility: Small Laptops, 2 in 1 Laptop/Tablets, Tablets, Smartphones & USB Devices, Laptops w/ Power Adapters less than 45W*
Charging Specifications: If the laptop is on (open), the charger will run the laptop and charge its battery. If the laptop is off (closed), the charger powers just the laptop’s battery.
*The best way to know your device is compatible with the AdventureUltra is to review the technical specs of your device, the AdventureUltra can charge any item via the AC port up to 45 watts. In some cases, you may need to close the screen of your laptop to charge. 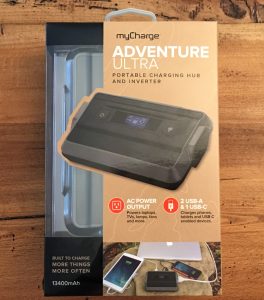 What Did the AdventureUltra Replace?

So now instead of having a big hefty cord and 3 different charging devices, I worked with just the one charger. This AdventureUltra added functionality to my charging needs because it can charge my MacBook Air AND an iPhone 6sPlus, iPad Mini 4, and Sony Alpha a5000 camera.

How Did I Test the AdventureUltra?

I ran the charger through a pretty rigorous test by constantly charging multiple devices anytime I used it. The specs call out charging the laptop when closed is the most efficient way to charge the device, but I let the MacBook Air run down to below 15%, then plugged it in along with a 50% charged iPhone and 30% charged iPad Mini. With all 3 devices connected, and the laptop in use (use = standard work stuff, running Photoshop, Mail, Chrome, PowerPoint), and all 3 devices eventually reached a full charge and based on the LED screen on the AdventureUltra there were 3 power bars left on the LED screen (which is AWESOME).

I was extremely impressed with this, as when I’m on the road it is good to have the ability to charge my multiple devices when a power outlet isn’t readily available.

I really want to test this AdventureUltra by charging something like a Boosted Board electric skateboard to see how long and how much charge it will give the board.

Where I had Issues with the AdventureUltra

While I really enjoyed the AdventureUltra I did have a couple of issues with the device. Note, these issues are minor.

The biggest concern I have for the AdventureUltra, the weight. It is pretty heavy, and over the past couple of weeks I’ve gotten used to having it in my pack, so I adjusted quickly. But it has some bulk to it, so be prepared. the lack of a case is another issue I had with the AdventureUltra, this can be remedied, with some like like a hard pencil case or some kind of sleeve, but still, with the LED screen and buttons I worry about it turning on randomly in my bag and running down prematurely. A case will also help keep the charging cable with the charger so it doesn’t get misplaced.

To close out, the positives WAY out weigh the negatives of the myCharge AdventureUltra. The concerns of weight and heft are solved by the ruggedness and durability. The lack of a case is an easy fix, whether it is buying or making a case. The charger works as expected and will provide all the power you need while on the go!

* I received this product free based on providing an honest review.

What I Backed on Kickstarter: JUMP by Native Union

Who is the King of the Tech Mountain?

Google+ vs. Your Marketing Mix