What Happens When LARPing Stops Being All Fun and Games? 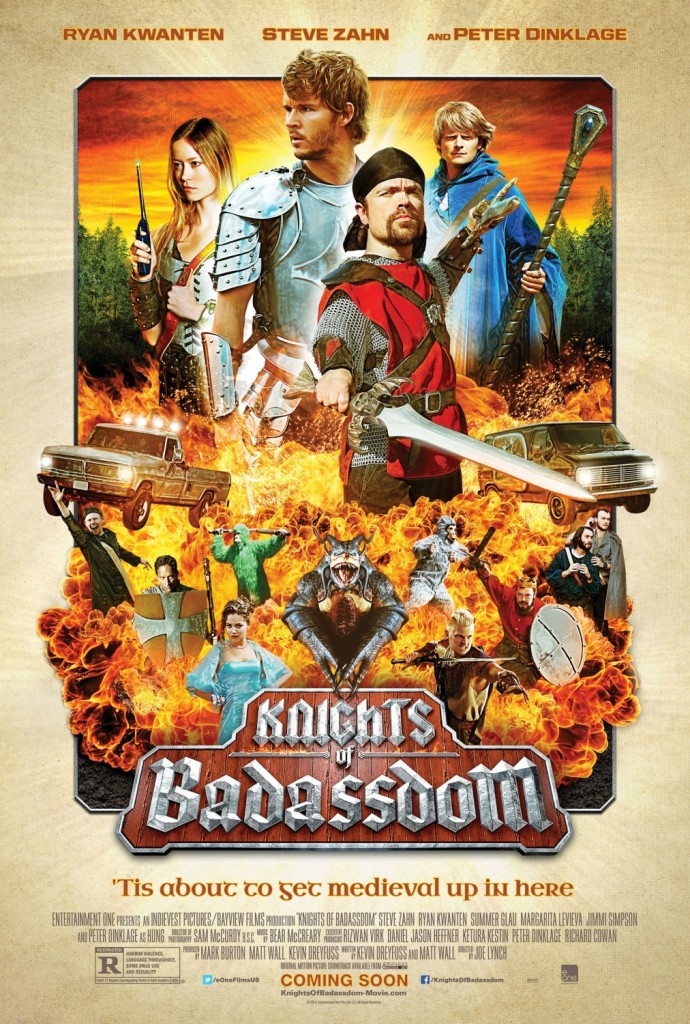 So last night I found myself with a small bout of insomnia. Having burned through the requisite summer viewing (Falling Skies, True Blood’s final season, The Strain, etc.), I was left with a quite house with the WifeTron and KidBot07 both fast asleep. After reading some of the weekly Wednesdays comic haul, I really just wanted to veg out and watch SOMETHING (anything, really). After spending some time surfing through Netflix and not getting too excited about anything in particular I hopped over to my iTunes downloads and like a bright light from the Fields of Evermore there was ‘Knights of Badassdom‘ calling my name.

KNIGHTS OF BADASSDOM follows three best friends (Peter Dinklage, Steve Zahn and Ryan Kwanten) and dedicated LARPers (Live Action Role Players) as they take to the woods to reenact a dungeons and dragons-like scenario fresh out of the mythical Middle Ages. Trouble arises after they unwittingly conjure up some serious evil in the form of a blood-lusting Succubus, from the pits of hell.

Fantasy and reality collide on the Fields of Evermore in an all-out epic battle of make-believe wizards, demons and assorted mythical creatures. Their courage and friendship is put to the test as they attempt to vanquish the evil they have summoned. Will the group prove to simply be foam sword-wielding LARPers, or true “Knights of Badassdom?”

Ok, so you know what the movie is about. Now you are asking, “Brian, what is it about this movie that toiled away in release hell that made you, A) Purchase it on day one from iTunes back in February and B) Keep watching it over and over?”

Those are two very good questions, I’m glad I asked. To answer the first one, when I saw the preview come out of Comic-con a couple of years ago I was really excited to see Peter Dinklage (pound for pound the best actor on the planet), Steve Zahn (a scene stealer extraordinaire), Ryan Kwanten (I had just watched ‘Griff the Invisible‘, and saw he has some acting chops), and Summer Glau (who doesn’t want to watch Summer romp around in sexy cosplay wielding dual foam swords?). And I’m also fascinated by LARPers, the social aspect and creativity that goes along with that fandom, is i-n-t-e-n-s-e!

Now for the second question… why do I keep coming back to ‘Knights of Badassdom’? Since purchasing, I have watched the movie probably 6 or 7 times (including last night/early this morning). Well for all of the actors mentioned above, and because it is a badass and fun as hell movie. It is insanely rewatchable, because it is a movie that doesn’t take itself too serious, but understand exactly what it is and delivers at every turn.

These are just a few of the reasons I continue to enjoy this movie, is it perfect? Nope. Are there changes that could be made? Who am I to say, I didn’t direct or write it, I’m just a guy with an AppleTV enjoying 90-ish minutes of turning my brain off. Why should you watch this movie? Well, to be honest, watch it to (and especially buy it) to make sure we keep getting great indie films like this one. ‘Knights of Badassdom’ is not meant for a wide audience, it is a niche for a couple of specific fandoms and I imagine one of the more fun movies sets since the beginning of filmmaking.

Some of the great standouts of this movie… the costuming, the LARPers all look amazing. It makes me want to check out a LARPing group to see if they are as authentic and creative (is suspect they are). I really liked the passion that came across in everyone on screen. I think it would have been really easy to mail it in for this source material, but they did not, and it is obvious from every broken fourth wall, and the way the actors throw themselves into the characters. Finally the most fun standout is Tom Hopper as Gunther. Gunther is an all in LARPer, always in character to the point he is banned from Midievil Times.

There it is, my thoughts about ‘Knights of Badassdom’, great movie? Nope. Fun movie? 100% yes! spend 90-ish movies having fun.

Check out the official trailer below and don’t forget you can purchase ‘Knights of Badassdom’ on iTunes, Amazon, or BluRay!