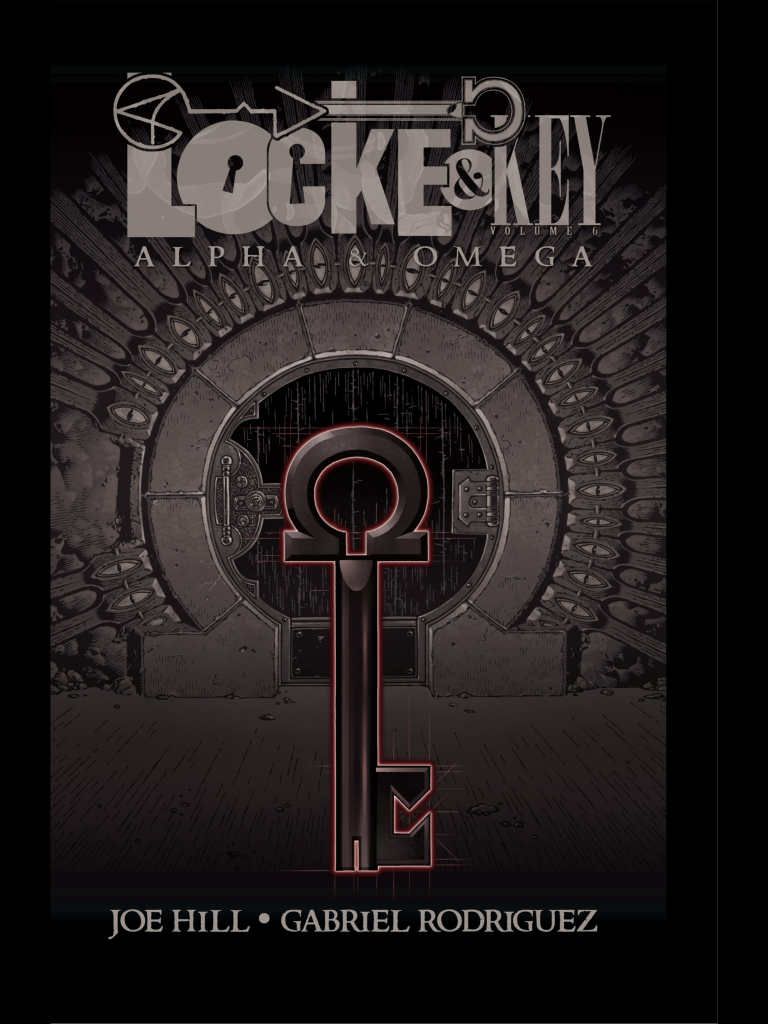 Finally, the final volume of the epic Locke & Key series from IDW Publishing company hit Comixology this past week. I’ve been waiting for what seems like ever ( in reality it was only about 2 months, since I didn’t start reading Locke & Key until about 2 months ago thanks to a Comixology sale) for the Alpha and Omega collected edition to hit the digital comic book store.

Locke & Key is written by Joe Hill, with art by Gabriel Rodriguez. It tells the story of the Locke family, and opens with the death of Rendell Locke and vicious attack on his wife Nina Locke by a deranged former student. The story focuses on Rendell’s children Tyler, Kinsey and Bode, who after his murder are moved from California, “back East” to the town of Lovecraft, Massachusetts to the Locke Family home called the Keyhouse.

The Keyhouse is a special and dangerous place  of magical keys and doorways full of possibilities and deceptions. There are numerous keys, all of which grant powers, abilities or experiences, all fantastic, all addicting. Hell, you can even buy replica keys HERE.

Ok, that’s enough of the describing what Locke & Key is all about, your can get that from reading the back cover of one of the six volumes making up this story.

When it comes to books like Locke & Key (aka non-superhero comics), I’m still relatively new. I’ve been reading comics since I was about 8 years old, and it has really only been the past 5 years that I’ve ventured away from the lands of flight and tights. Books like this one, Y the Last Man, Thief of Thieves, Chew and Morning Glories (to name a few) have really opened my eyes. And I’ve always been attracted to the sequential storytelling aspect of comics, even more than the art work. This is what drew me to Locke & Key, I had read Joe Hill’s The Cape, series and loved it, and my good friend David Griffin from Think Hero kept telling me what a great book Lock and Key was, then when Comixology ran a pretty amazing sale I was able to pick up Volumes 1 -5 for pretty cheap. I bought the first volume, Welcome to Lovecraft and finished it up in about 2 hours, and headed back to Comixology for more.

I was attracted tot is book mainly for the words, but Gabriel Rodriguez’s art is nothing short of amazing. Hill and Rodriguez are an amazing team, they could re-write and then illustrate the phonebook and it would sell out. Of all the different kinds of comics on the shelf, it is refreshing to see a book like this, with a clear idea and story with a beginning, middle and end. Hill creates characters that you love in the Locke family and their friends and a villain so evil in Luke/Dodge, I’m surprised he doesn’t show up on lists for most evil character.

As you know, every great story needs a great villain. Locke & Key has that in spades, Luke/Dodge has the power, drive and devious mind to rival the most dastardly evil-doers in comics. And as evil and villainous as the main foil is, Tyler Locke is that heroic. Ty is a conflicted character, he knows his dad loves him, but resents him for taking him away from the summer of his dreams, then when Rendell is killed, Ty spends the rest of the series doing what most level headed sensitive teen would do… be all angst-y and shit. I loved how Joe Hill used what Ty was feeling as a foil for the keys that were found in each book.

Now, I don’t really want to give anything away about this series, because there are some great twists and turns and honestly you need to see what the different keys are and the fantastical powers they give. I recommend reading this series in the trades or collected editions, because the inclusion of the history of found keys at the end of each volume. I have to also say I’m very happy I waited to read this series after it was completed, I’m not sure I could have waited for the typical production schedule of a comic month-to-month.

So to recap… read this series, you won’t be disappointed.