This is a review of Nick Offerman‘s Paddle Your Own Canoe: One Man’s Fundamentals for Delicious Living (Audiobook)… it will be full of opinions, and small amount of man crush-ery. 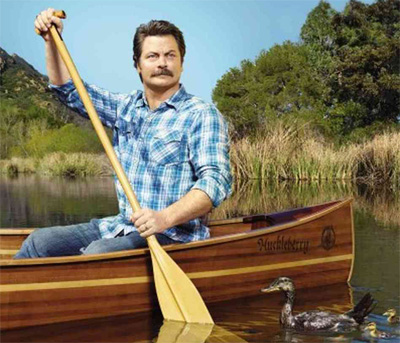 Lately, I’ve been spending a lot of time in my car. I feel like I’ve been commuting all over southwest Ohio lately, during these long drives on lonely Ohio backroads I typically find myself starved for content. I’ve found a bunch of great podcasts that help fill the silence between the miles, but I typically devour those rather quickly and find myself looking for more. As luck would have it I was listening to some older Nerdist episodes and the October 11, 2013 episode titled: ‘Nick Offerman Returns‘ came across my car speakers.

During this 67 minute podcast Nick Offerman was talking about his new book… my interest was peaked. ‘Paddle Your Own Canoe’ was released on October 1st, so I was already behind, so I made a note to pick up this book, at the first possible chance. I’m ashamed to admit it then took me a couple of months to pick up the book, and only after purchasing a new Kindle Paperwhite, did I add Offerman’s tale of meat, mustaches, and what it means to be a man to my collection. At this point I found I was having a hard time to carve out time dive deep into the book, I was busy ready a couple of books for the upcoming semester and prepping lesson plans. That lead me to search for the existence of an audiobook, and when I found it and learned Nick Offerman’s dulcet tones where narrating, I’d found my guide to finding the “Fundamentals for Delicious Living”.

Here is what I learned from the Paddle Your Own Canoe Audiobook… Nick Offerman is my spirit animal. He has had an amazing life, full of hard work and taking measured chances to make the life he wanted to live. The book starts with his life growing up in a small community outside of Jolliet, IL., called Minooka. To a large-ish cadre of farmers, teachers and all around salt of the Earth family. I’m not going to go real deep into the the details of the book, but I’ll touch on my favorite parts, and what I learned.

I’ll start with religion. It was really odd to listen to him talk about religion, mainly because many of his articulated points mirror my own. It is never easy to share your views of God and religion, and it is rarer still to find ideologies in alignment with your own. Offerman’s ideas of the community aspect of church/religion are spot on, and pomp and circumstance of the organization of religion don’t necessarily match up to the views of the various books people of the world chose to follow. Now I’ll be clear, Offerman (and I) don’t see anything wrong with believing in what you want to be believe, but at the end of the day just take be cool.

The second part that stood out is his love of working with wood… not that kind of wood, but he shares his love of using that kind of “wood” too. But seriously, he is a master craftsman with all types of wood, making custom handcrafted furniture that will stand the test of time in his own Offerman Woodshop (OWS). At OWS they make some amazing things, from dining room tables to mustache combs to kazoos. It’s pretty impressive stuff and the love and respect he puts into each piece of work, If I had the means I’d totally want to order one of the OWS custom canoes or kayaks. Or better yet try and learn to make one myself.

Finally, I was really touched by his love and devotion to his wife, the beautiful and talented actress Megan Mullally. I truly believe the audiobook adds a ton of depth to the Megan sections of the book. From the story of their courtship to the wonderfully beautiful way they planned their wedding. At the end of the day, they are two people devoted to each other, not out of a sense of quid pro quo but a real deep and true love. Listening to how he works just as hard at his marriage as he does his craft of acting and vocation of wood working is a true inspiration to anyone in a serious long-term relationship.

Ok, so there you have a it the highlights of the book, and as I’ve gone back and read some of the passages that really stuck out with me in the Audiobook, these are the sections that I found benefited the most from Nick’s reading. There are times where you hear the laugh in his voice or the tears in his eyes or the love in his soul. If you are a fan of Ron Swanson, you should totally check this book out. If you are a fan of a great life story full of hard work and determination, you should totally check out this book.