The 12th Doctor Is In on Doctor Who 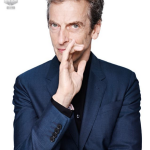 The wait is over, the new doctor has been announced, and is non other than… Peter Capaldi. Capaldi, was most recently as a W.H.O Doctor (ha ha) in World War Z. He guest stared on the Fires of Pompeii episode for Doctor Who, and played a pretty big part on Torchwood: Children of Earth.

We’ll first see Capaldi as the 12th Doctor when exiting Doctor Matt Smith regenerates during the annual year’s Christmas episode. Where he will take over the role full time when the series returns sometime in 2014.

Capaldi’s casting is a throwback to the classic era when the Doctor was portrayed more as an older, more stately gentleman. I’m excited to see what he can do as the Doctor, as I haven’t been the biggest fan of Matt Smith, at the beginning he was too similar to David Tennant, and it just made me miss MY favorite Doctor.

That being said, Congratulations to Peter Capaldi in this new adventure through space and time as the 12th Doctor!