The Apocalypse Has Been Preempted… by Giant Robots! 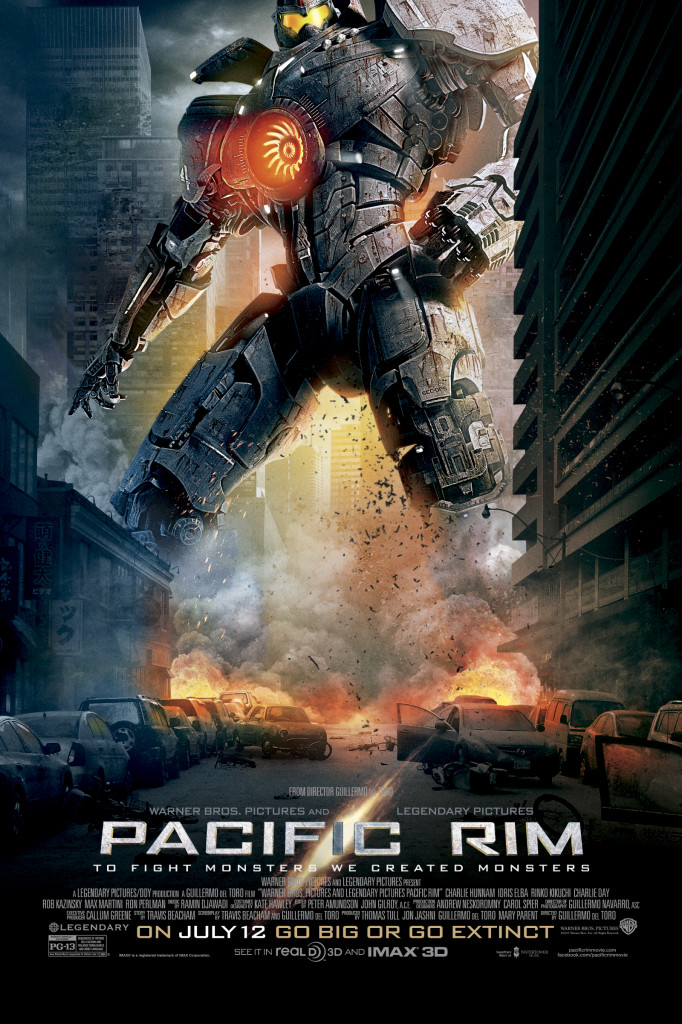 Humanity on the brink of destruction, time running out as we battle superior alien foe? Yes, it’s a bit clichéd but when one puts the heart and soul into a project like Guillermo del Toro does in Pacific Rim, a visual tour de force that is a reminder to the monster movies of old with its own little helping of je nai se qua, we realize that it’s not the concept but the execution that makes the difference.

As mentioned, the movie’s premise isn’t too hard to follow. A fifteen minute prologue with a voice over by the main character, Raleigh (Charlie Hunnam of “Sons of Anarchy” and “Green Street Hooligans” fame) explains the dire straits. Nearly two decades before the main focus of the story begins, humanity was given a rather rude notice that we were not alone in the universe. Funneled through a quantum fissure at the bottom of the Pacific, the Kaiju (Japanese for monster) emerged. The size of buildings, these monsters tore through cities before combined military forces could take them down. It was obvious that conventional arms was not enough, thus the Jaeger program was created. German for ‘hunter’, Jaegers are mechanical behemoths created by the world’s brightest minds to combat this unending threat. Using a neural link between two pilots (affectionately known as drift) mankind fights back and successfully curtail the invasion.

Fast forward seven years and humanity is in the 11th hour, fighting for its very survival. Only a handful of Jaegers are left and it’s up to Raleigh and his green co-pilot, Mako (Rinko Kikuchi, “Sky Crawlers” and the upcoming “47 Ronin”) to do battle against the biggest and deadliest Kaiju man has seen. Oh, and they get to do it driving a virtually obsolete Jaeger whose storied history Raleigh knows all too well.

While the story isn’t too deep, there are some very sound notes interspersed with the mega-action (which we will get to soon enough). Hunnam’s Raleigh is aloof, unpredictable and somewhat difficult to connect to; this isn’t a knock on shoddy writing, rather an applaud for del Toro creating a character the audience can root for despite not being able to fully engage with him; Raleigh’s distance is played out in horrifying clarity in the first fifteen minutes of the film. Then there’s Mako, the young woman who wants nothing more than to get the chance to become a Jaeger pilot to avenge the city she watched destroyed when she was but a little girl, one her guardian and military commander of the Jaeger program, Stacker Pentecost (Idris Elba, “Thor”, “Luthor”, “Prometheus”, and “The Wire”) refuses to allow. Whereas Raleigh is defiant with the need to be culled, Mako is passionate but maintains a respect for her guardian that offsets Hunnam’s chaotic nature. It’s an interesting aspect of the film as these two characters must ultimately learn to co-exist with one another’s pain as well as their own.  More than that, there is something that works between Raleigh and Mako, a chemistry and ease that harbors just below the surface and gives credence to the burgeoning relationship sculpted by their drift experience. 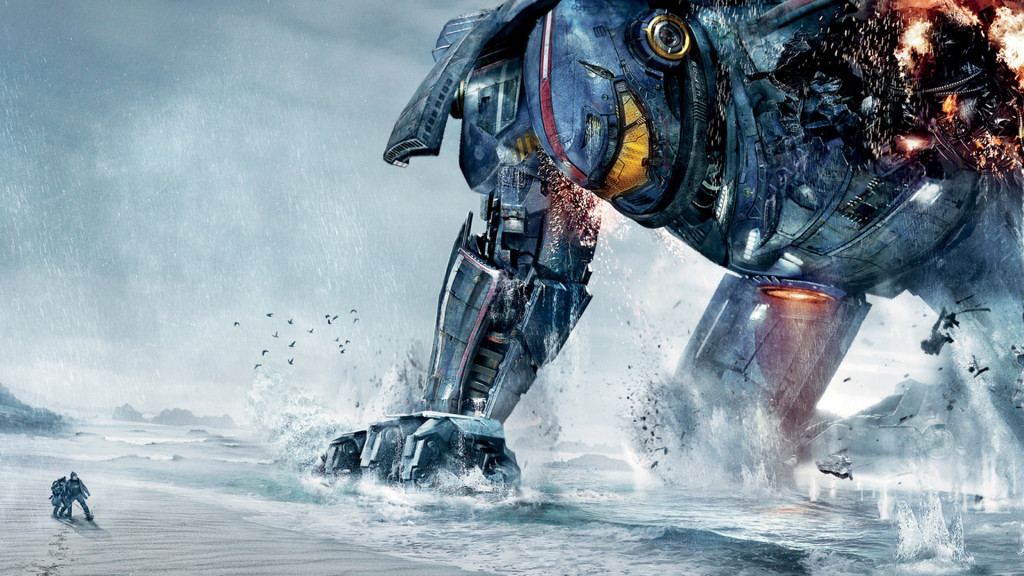 As admirable as the main characters are, there is a good deal of screen time for the supporting cast, the biggest of which is Ron Perlman (“Sons of Anarchy”, “Hellboy”, “Drive”). His role as Hannibal Chau, the foremost dealer in the black market of all things Kaiju, offers an interesting subplot as two eccentric scientists, Charlie Day’s (“Horrible Bosses”, “It’s Always Sunny in Philadelphia”) Newton Geiszler and Burn Gorman’s (“The Dark Knight Returns”) Gottlieb search for an answer to end the threat once and for all. Max Martini (“The Unit”, “Revenge”) and Robert Kazinsky (“True Blood”, “Red Tails”) are the Hansens, a father/son duo captaining the only Mach 5 Jaeger in existence. As the younger Hansen, Kazinsky is arrogant and disrespectful, butting heads with Raleigh in both the figurative and literal sense. Clifton Collins Jr. (“Parker”, “Red Widow”) rounds out the primary cast, one that works well together and provides the charm and soul of people you actually care about what happens to them.

While the acting and characters are a pleasant surprise, the thing that drives Pacific Rim is the promise for some serious action. No matter how good the script, if they weren’t able to pull off this aspect of the film, it would have been a failure. Well, consider it a rousing success. I’ve never been a part of an audience where the spectacle has made me feel so small and utterly insignificant. The size and physics the CGI creates these major battles in stunning. There is a gravity behind every punch, every explosion from water or into buildings on a scale never before witnessed on the silver screen. As awe-inspiring as the CGI was for Transformers and its two sequels, the fights were often too hectic and difficult to follow for many people. There is no such problem with Pacific Rim. First off, the sheer size of these monstrosities prevents them from moving too fast but, more than that, del Toro understands that fast and frenetic isn’t always necessary with filming an action piece. Like a good wrestling match, each fight tells a story and, as such, a beginning, middle, and end. It’s a testament to the advancement of special effects and a director that understands a big budget and high end CGI can be used for more than a bit of the rock ‘em/sock ‘em.

An added addendum for the effects is that this movie is one you should see in IMAX 3D. I am not a fan of the 3D medium; oftentimes it’s more of a distraction than enhancement. Not so with this film. It actually sharpens the already clear Kaiju/Jaeger battles, granting a realness normal print film probably may not be able to capture. If I’m del Toro, I’m bottling up the secrets on how to make 3D technology work. A lot of directors and movie studios would do good to buy said secrets. 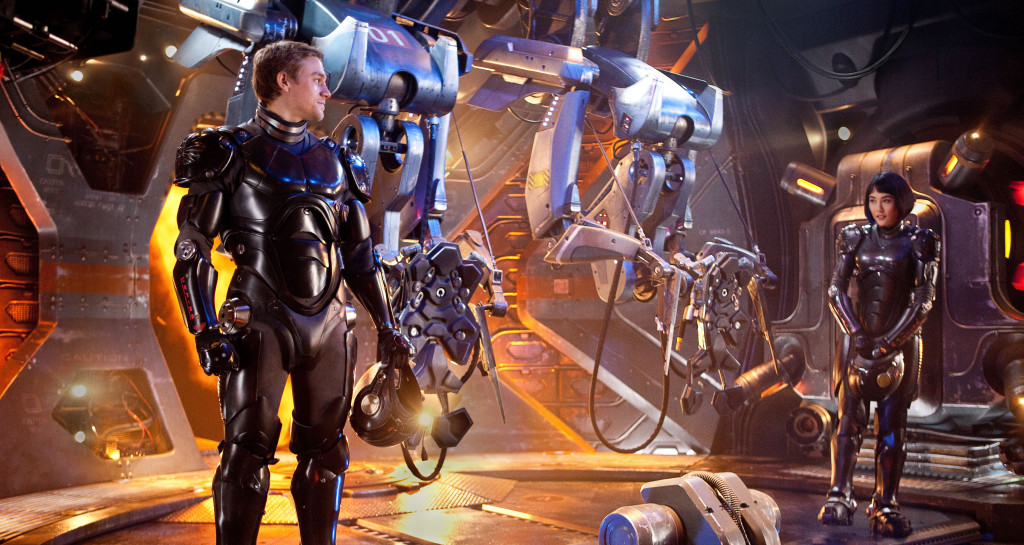 Like any movie, Pacific Rim is not without its flaws, chief with me is the musical score. Though not terrible, it lacks the power and strength this type of film warrants. And then there was the humor, or inefficient representation of said humor, much of which was tied to the rivalry between Day and Gorman’s characters. Though there were some chuckle-worthy moments between the two, it was over the top. Other attempts of humor also missed the mark, never quite feeling like an organic part of the film. It’s a reminder that every movie doesn’t need humor interspersed throughout to be enjoyable and fun. Sometimes serious is good, even when it’s giant robots versus giant monsters. Finally, there was a particular scene in the climax that was so reminiscent of Independence Day I had to shake my head in disbelief.

When it comes down to it, Pacific Rim is just what a fun summer movie should be. It has action out the yang, special effects to drool over and characters to root for. Even without the Avengers humor, moviegoers will want to immerse themselves in this visually stunning and surprisingly touching film over and over again. Now all I need to know is when is this bad boy coming to Blu-ray?

Four Smiley Geeks (out of 5)