Everyone has a side on the recent comments from Steve Jobs about the iPhone/iPad/iPod Touch and the lack of Adobe Flash support. Forget for a minute the argument about reduced battery life and processing power. Take a step back and look at this problem from Apple’s point of view.

Apple has a rabid user/fan base who all love content, like over a billion apps downloaded from the iTunes App Store, they will pay for apps, songs, videos and for iPod Touch users OS upgrades. Keep all of that in mind and think for a second: Why doesn’t Apple want to allow Flash on their mobile devices? The answer is 2 simple words: App Store. By allowing Flash on their devices they will cripple their most profitable enterprise. If users can view Flash videos via YouTube or Hulu using the Safari mobile web browser what use do they have to purchase a video or song via iTunes? All of the outrage over the lack of Flash is both shortsighted and silly. Developers will be hurt and they will not be able to continue to push the envelope on app development, because games/features will be available for free via the mobile browser. If users can visit a website to playFrenzic or BeJeweled rather than pay $.99 for the app what use do they have for an app on their iPhone/iPad/iPod Touch, why would Apple shoot themselves in the foot?

So Flash lovers hem and haw all you like, but Apple will probably never give in and add Flash capabilities to the mobile family of hardware, it just doesn’t make sense from their position as the mobile content provider market leader. 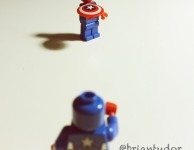 #aSPIDEYaday – My Year With LEGO Spider-man